We are having a heck of a season and it has just barely started!!!!

One of our goals this year was to use the farm as an educational tool, educating the children of the community on the importance of growing and eating fresh food. I was connected with an amazing outreach program in Champaign called DREAAM House. DREAAM House stands for Driven to Reach Excellence and Academic Achievement for Males. It is a program that was developed in 2015 to encourage positive behavior and learning, keeping kids (pre-K to 7th grade) in school and on the right track.

We had the pleasure of hosting our first group this past Friday. There were 20 fourth and fifth grade boys. We did a farm activity identifying different crops then we all went to Hendrick House for lunch. It was so exciting and invigorating to watch these boys harvest and try different vegetables right from the farm.

Squash isn’t for everyone 🙂

I am trying to track their knowledge and exposure to fresh vegetables through surveys. After I ensured them that I was not giving them a test on their summer vacation they were more than happy to oblige. It was interesting to learn that a lot of their schools currently have gardens, which is really great. We have two more workshops scheduled with DREAAM House coming up next week and July 11. The next two will be 23 first and third graders. It should be very exciting and I have lots of fun things for them planned 🙂

Here is the progress report for this week!

HOT HOT HOT!!! SO DANG HOT! We haven’t had rain in weeks! This is great for the plants (since we have irrigation) but not so great for Justin, Rey and myself. I am starting to lose the winter pudge at a rapid pace. 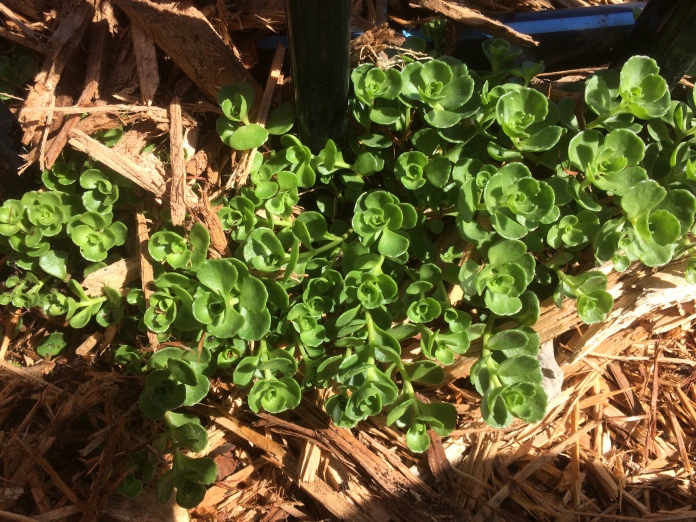 Sedum = Kudzu of the midwest. Don’t plant it unless you want it to remain there forever!!! This was the ground cover on the roof before the remodel. I am completely convinced it will grow in midair. 🙂

We are at full scale war with the Colorado Potato Beetle. I completely underestimated this pest. What they lack in smarts they make up for in numbers. We have now implemented hand management, meaning we are going over every single eggplant, potato and tomato plant once a week between treatments squishing them by hand. It has been really interesting to see the entire life cycle, which is pictured below. 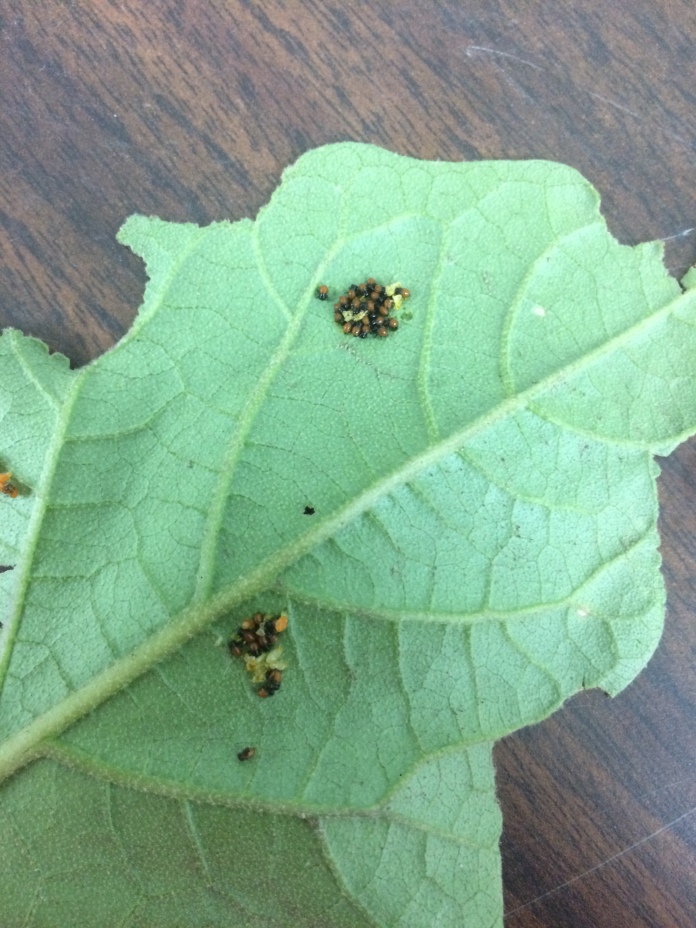 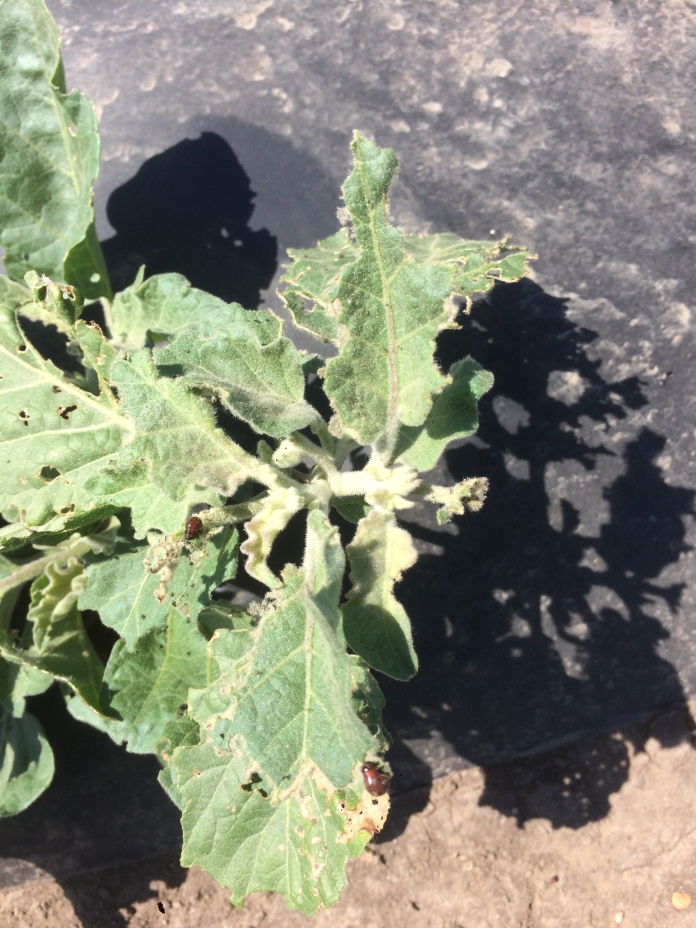 The farm is flourishing! Our crops look amazing!! We are having an early harvest on almost everything. Even our tomatoes are fruiting! I am slightly nervous about them ripening so far from the beginning of school but am excited that we can get some processing in before the kitchens get busy. We harvested some beautiful beets this week. The squash is so early that we will be harvesting next week! 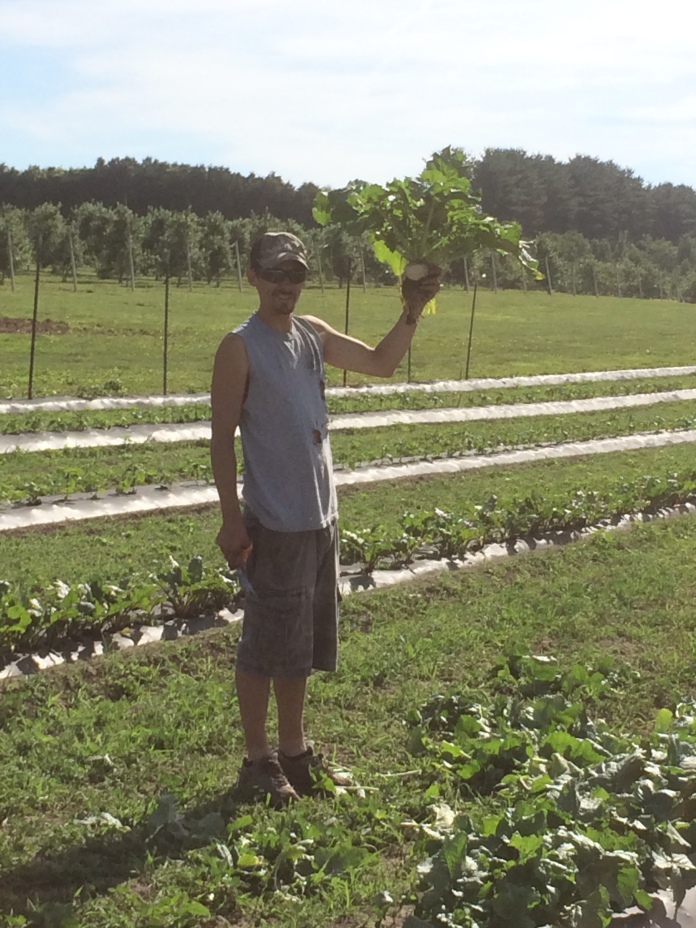 Despite the horrid weather we had at the beginning of the season, the farm is doing quite well. All of the surviving plants have seemed to have outgrown the damage that was inflicted by the storm. Justin and I have settled into our routine for plot maintenance (trellising, fertilizing and weeding) and we are already harvesting, which is two and a half weeks ahead of last year! We harvested huge turnips that were so deliciously smelly the scent followed us around the entire day. We also harvested kale and many of our herbs. This warm weather is really doing great things for the plants and promoting rapid growth.

BUT… you can’t have thriving plants without everything else from their habitat thriving as well.

Our enemy the Colorado potato beetle reared its ugly head at the end of last week but it wasn’t on our potatoes. It was on our tomatoes. Coincidence that the tomato beds are in the spot where are potatoes were last year?? Upon first finding this pest I initially thought “What a dull-witted lazy bug.” The beetle would play dead once found which made them easy to smash. Thinking they were only on the tomatoes I also thought they were lazy since they had not migrated to the other end of the farm. I was wrong. 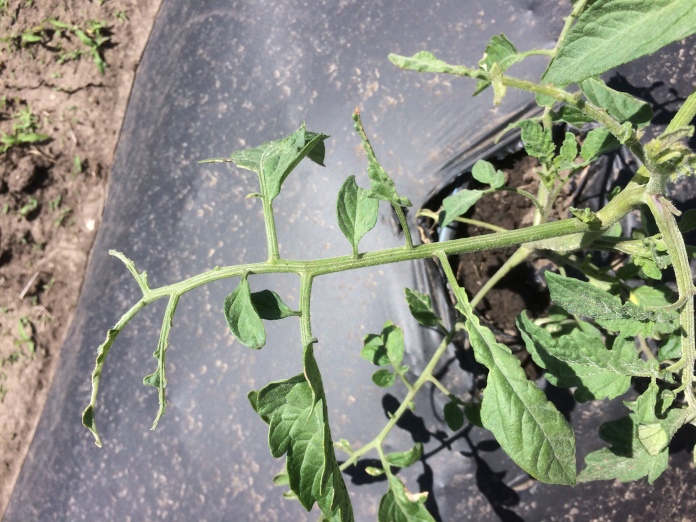 Upon further inspection of the entire acreage I found several egg clusters on the back of the leaves of our potatoes, peppers, eggplant AND tomatoes. Luckily they are bright orange and therefore easy to spot. If you all remember last year, it was less than a week for total destruction of the potato crop once finding these little nasty things. I was prepared, got up very very early (two days in a row), as to not hurt our little pollinator friends, and took them out.

We also smashed the egg sacks by hand. Bleh! It’s hard to see from the above picture but they are the gross orange things on the leaf. So far so good… and our potato crop is big and beautiful this year!! 😉

**** For all those gardeners out there reading the blog let me offer up some advice… If you have a pest problem and aren’t friends with a entomologist yet that would be my first suggestion.

Secondly, take a picture of the target pest and use google search images to identify what they are and what is the best way of controlling them. Google was very helpful in identifying this particular pest!